Category Archives: All about me, myself and I

Dear reader, the time is *almost* upon us for the Girls & Monsters Blog Tour ♥ Starting on March the 25th and ending on April 30th on releaseday, I’ll be visiting 28 blogs. At each stop, not only will you discover something new about the stories and/or me, but also about my wonderfully generous hosts ranging from reviewers, authors, bloggers, YA and horror fans all alike. 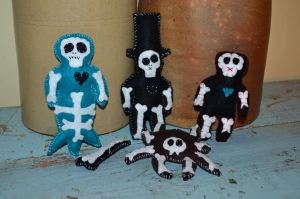 To celebrate my debut collection of novelettes, I have been hard at work on a special Skellies set representing each monsters of the stories. Handmade in felt, *you* dear reader, have the chance to own your very own killer mermaid, heartless neighbor, bone to tame your own Black Dog, Bunny the spider and a bone-broken zombie. The contest will run during the tour with chances to win Girls & Monsters softcovers as well.

Now, if you just cannot wait for the release day to get your very own copy, there’s always the Goodreads giveaway with an extravageant 10 chances to win ♥

5 Comments   |  tags: Books, Horror, Writing, Young Adult | posted in All about me, myself and I, Good Book, Highly recommended, Short Fiction, YA

And the Skellies go to….

For the sourpusses, I’ll be giving away a series of Monsters Skellies for my upcoming book launch, GIRLS & MONSTERS, so keep your eyes opened – and beware, they’re behind you….

And now for zombie fans, my very first anthology published short story BLOOD on the BEACH is now available to read for free on Tales of the Zombie War.

Halloween is my favorite time of year, it involves spooks, candy and tragic skies…but please enjoy safely, no one likes a *real* corpse ♥

2 Comments   |  tags: Coffin Hop Horror Web Tour, Contest | posted in All about me, myself and I, Little Obsession

I fell in love with writing in my tiny flat in Zone 2, London. It was a freezing cold night, a draft came from the single-glazed bay window of that old Edwardian front room I called my home, my fingers danced on the keyboard as words flew out, when I realized: I wouldn’t be doing anything else, right now.

Then came the Master’s in screenwriting diploma a year later. When people asked if anything happened with the scripts I’d been writing,  I replied of course not, I knew no one in Montreal, had been gone too long, lost touch, etc. So, during the two next years, I made my own short films: produced, directed, wrote – and hated it. They never were as good as what I had written, even if they were distributed and sold to TV.

Novels, I told myself. I’ll write novels, get them published, and be happy – but agents got in the way. Five years, seven projects, and about 500 rejection letters later, I still haven’t found one. Oh, I’ve gotten advice and cheers and encouragement, some said my writing was beautiful, I knew how to build up a scene, they admired me and loved my work…but no one wanted to represent me.

What is a girl to do? How do I get published without waiting another year or two to get an agent, then the rewrites, then the submission to publishing houses? Well, I sent my query to the best small publishers my research provided…

AND GIRLS & MONSTERS IS GETTING PUBLISHED BY DARKFUSE IN 2013!!!

Cheers to you all, I’m having a drink right this moment 🙂 I never thought *this* could happen that fast.

Oh, what is Girls & Monsters, you ask? It’s a collection of 5 novelettes about, well, girls and monsters. It’s dark, gloomy, aimed at the young-adult/new-adult gap, it’s scary and funny and I’m in love with each of my characters and their monsters – because don’t be fooled, we all have one waiting in the dark…

41 Comments   |  tags: Books, Horror, Writing, Young Adult | posted in All about me, myself and I, Good Book, Highly recommended, Little Obsession, Short Fiction, YA

I’m alive, but writing about the dead.

Robert Smith, Pornography written all over him

I’m obsessed with my new project about two brothers looking for their missing father in the north, filled with wild snow and vengeful ghosts. So I’m trapped  until I put an end to Hunter’s Trap.

Meanwhile, here’s some eye candy. That Mary Poole is one lucky lady♥

6 Comments   |  tags: Writing, Young Adult | posted in All about me, myself and I, Little Obsession, YA

New year’s melancholy. What I used to be, who I wanted to become. Have I changed? Probably. But one thing remains: to aspire to something different.

In the spirit of this list of wishes, here’s a flash inspired by this dream I’ve had just before waking up. You know the kind – one that stays with you all day, that you can’t push out of your mind. And days later, you just have to bleed it on the page.

Clever, they pretended to be something else. A meteorite shower all over our planet, but nothing to worry about. Brown shapeless space stones weren’t a concern to us, until they landed.

Inside, millions waiting to take our place, to send us away. Ships lined up, futile fighting ended in death; my father, the neighbor, our president. The only hand left to hold was my mother’s.

Through the shredding of our lives, she smiled at me. I asked her: In the wide map of black above, will we lose ourselves? She said: Between the stars and the moon, nothing will catch us if we fall.

For all of you who are still missing out, City of Hell is on the loose, catch it if you can while one of the wonderful stories is FREE ♥

12 Comments   |  tags: Books, Inspiration, Writing | posted in #fridayflash, All about me, myself and I, Good Book, Highly recommended, Little Obsession, Short Fiction

Darling zombie poet April R Denton bestowed this award to me – as if her  dedicated poem wasn’t enough. Sadly, she is taking a break from blogs, tweets, etc, but if you want to read her amazing prose, come here.

My blogging nominations to spread the love of the Liebster – it means beloved and dearest. Cute, non?

REN WAROM is one amazing, weird, creepy, cursing sailor of a writer, and I adore not only her rich stories but how she always has a nice word twist. Beware: highly addictive.

AMY L OVERLEY makes me laugh with her genius plots and schemes as  the co-founder of the Genius Club. One hell of a writer.

MIKE WORDPLAY is a new friend who cheers me up when I feel ugly, old and fat – not an easy feat, let me tell you. Quite a talented boy.

JASON DARRICK can be very scary and a little creepy, but that’s only when you read his stuff. He’s a cool dude with great muscial taste, too.

TYMOTHY LONGORIA is a sweet, kind-hearted and go-getter writer who helps practical strangers with their query letters. Oh, and he’s adorable, too.

There you have it, peeps – stalk them on twitter, follow their amazing blogs, and show the love ♥

26 Comments   |  tags: Inspiration, Writing | posted in All about me, myself and I, Highly recommended, Little Obsession

My friend and Gothsis Angela Addams got a great idea: we exchange notes on what we loved/hated growing up being goth. Here’s the second part, the first being posted on her blog.

The Trent I'm trying to forget

Angie: This band changed my life!!! I remember the first time I ever heard a NIN song. My cousin tossed a cassette tape (yes, it was that long ago) at me and said, “I think you’d better listen to this, I don’t expect I’ll get that tape back once you do.” And she was right…the album was Broken and I listened to it until the tape actually broke! Wish and Gave up, in particular, were two songs that I couldn’t get enough of…and I’ve never been disappointed in concert because Trent Reznor always plays them for me 😉 By far my favorite band! I’ve got a ton of NIN stories…in fact, I think I’ll write up a separate post about them!

Anne: I discovered them through a friend, too, but I hardly remember who or where we were. What I can’t forget is when my friend Christopher dragged me to their concert at the Astoria in London, 2005. I pictured Trent Reznor sick and dying from too much rock and roll – circa 1995 – but then this beefed up dude with arms like trees came out and I couldn’t believe my eyes: Le Trent lives! And yum, I’d goth him up real good in an alternate universe, one in which his wife wasn’t some sex kitten and he didn’t have a kid. SO HAPPY he chose to live instead of, you know…

Angie: Okay, I couldn’t resist…sorry Anne…although it seems like some kind of prerequisite for all goths to LOVE Robert Smith and The Cure…I just couldn’t get into it…mainly because a bunch of people told me I HAD to like them…Angie’s instant reaction to being told what to do…full stop, brakes on, arms crossed, don’t tell me what to do stance…so, I’ve never been a fan.  So much so that when I finally relented and decided to give them a try…paid a crapload of money for a ticket and went to see them in concert…I fell asleep in my seat…WORST.CONCERT.EVER

Seriously, can I have a piece of him?

Anne: My husband, my lover, my imaginary boy! You know, I’ve been defending Mr Smith & Co for so long – 25 years, actually – when people call them out for wearing badly-applied makeup and for singing happy songs, that…I won’t stop now! HOW can you say that, Angie? He’s a genius, a rock star, an unbelievable composer, an artist, a poet, my heart & soul! Then again, you do like Marilyn Manson, so we can’t all have good taste, huh?

Angie: I was a little late to the Jack and Sally party…I missed the movie in the theaters…well, actually, I once again, pulled a classic Angie and skipped it cause I hated all the hype and can’t stand to be told what I’ll just love…trust me, worst mistake ever…since then though, I think I’ve watched the movie at least 200 times, I know all the songs off by heart (even had part of one play as my wedding song) and have an obscene collection of movie stuff…AND I have Jack tattooed on my leg!

Anne: I went to see it four or five times at the cinema, a thousand years ago. I just couldn’t get the songs out of my head, and that love story was exactly the kind I like: with skeletons, spiders and heartbreak. I watch it 3 or 4 times each year, can’t help tearing up as they meet up at the end – aw, and that twirly hill just kills me. And yeah, I’ve accumulated loads of Burton crap throughout the years, but I call it my prized collection, which proves everything is relative, I guess.

So there you go, you know a little bit more about the two gals who brought you The Minion of Misery Award:)

33 Comments   |  tags: Films, Inspiration, Music | posted in All about me, myself and I, Highly recommended, Little Obsession

The City of Hell bugs are on the loose!

The day has come: the horror anthology City of Hell has launched, and everyone can finally be scared out of their wits. I’ve never been part of a project getting so many good reviews before, so I’ll just say this – buy it.

I didn’t feel like posting a Fridayflash this week, instead here are the very first words that will appear in Wild Swan. Not a prologue per se, more like a poetic warning about the book. Ready? Go!

Fire, See How It Feels

You like? Me too. It’s totally copyrighted, so don’t even try.

13 Comments   |  tags: Books, Writing, Young Adult | posted in All about me, myself and I, Good Book, Highly recommended, YA