My friend Emma Cunningham said his book Life Without Giamotti was her favorite of all times; he writes horror and zombies; he’s a cool guy. So here I present to you Sean Munger, author of the book Zombies of Byzantium.

I often wonder about why I write genre – how about you? Why did you write a horror story? 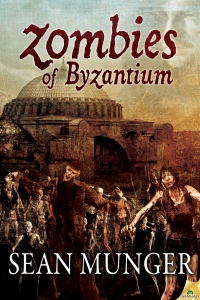 Strangely, before I wrote Zombies of Byzantium, I had never written anything in the horror genre except a short story. I’ve been a lover of Byzantium for years, and since I began reading Byzantine history I wanted to do a book set there. The thing that struck me about it was how much it was like a constructed world out of a fantasy or science fiction book, like Middle Earth in Lord of the Rings or Barsoom of Edgar Rice Burroughs’s John Carter of Marsbooks—but Byzantium was a real place where real people lived. I tried about three or four different ideas, all of them I guess you’d say historical fiction, which were all extremely flat, dull and lifeless. Then I hatched the idea of a zombie outbreak in medieval Constantinople. Amazingly, shifting to the horror genre suddenly made Byzantium come to life on the page. It was like flipping a switch, or that famous cut in The Wizard of Oz when Dorothy opens the door in black-and-white and suddenly Oz is in color. I really can’t explain it, but something made it live.
Once I started to get into the story itself it made me realize how much the genre of horror can really explore aspects of the world you never thought of before. I’ve read a lot of books about Byzantium but in all of that reading I never once encountered the concept of fear or horror. If Byzantines believed in ghosts or the supernatural, for instance, they must have done so entirely in a religious context. So what would scare you if you lived in 8th century Constantinople? If a horde of flesh-eating undead zombies was fanning out through the streets devouring your neighbors, how would you, as a person living in that place and time, react? When this became more interesting to think about than the setting itself, I knew I had a story worth telling.

That’s so weird, the genre chose you instead of the usual way – like me. I’ve always loved horror, but more of the darker kind than slasher or graphic. I love to explore how people can appear normal but are far from it; those are the best characters, surprising not only the characters in the story but the writer, too.

So I gather you do a lot of research before you write your stories, but how else do you prepare? I’m a crazy outliner and I cannot start to write unless I know where my plot is going and who’s doing what and the most important: the ending. Are you like that, too?

My relationship with outlining is sort of complex. How completely I outline a story really depends on the story. I’m not a rigid outliner for the most part, usually because an outline is sort of like a military battle plan. It looks great on paper, but once you get on the battlefield, events can render it obsolete pretty quickly, and trying at all costs to conform reality to the plan often gets people killed.

I usually do start with a strong idea of what the end point is going to be, though. The ending is pretty much everything and I agree it’s the most important point. As I go along I usually make a list of things that need to happen and, particularly, potential questions or objections the reader might have that need to be addressed. If I strongly want something to happen, I have to write things into the story that close off other opportunities and leave the desired path as the only possible one.

Are you familiar with a movie from the 70s called “The Warriors”? That movie made me incredibly angry. The plot concerns a gang that gets framed for a murder, and they have to cross the entirety of New York City, which is controlled by rival gangs, in order to reach their own territory. They do this on foot, naturally. What made me angry is, the movie never explained why the gang just doesn’t hail a taxi. Wouldn’t that be much easier? Obviously the writers needed it to be the way it was, but they never explained that potential objection, and the whole plot hinges on it. So if I was writing “The Warriors,” the next scene after the murder would be some plot device to explain why they can’t just take a taxi back to their territory.

Author of Dark Tendency END_OF_DOCUMENT_TOKEN_TO_BE_REPLACED
This entry was posted on Monday, March 11th, 2013 at 7:33 pm and tagged with Books, Horror, Inspiration, Writing and posted in Good Book, Highly recommended. You can follow any responses to this entry through the RSS 2.0 feed.
« Girls & Monsters Blog Tour & Skellies
Girls & Monsters, the blog tour »

4 responses to “Chatting with… Sean Munger”