My good friend Colin F Barnes (writer and Anachron Press editor extraordinaire) has a new book coming out, so I invited him to talk about it – and you lucky peeps have 2 chances to win the ebook by tweeting about the giveaway (with a @ColinFBarnes mention, so he can track it).  The winners will be picked next week, good luck ♥

Tell us about this new book of yours, Mr. Barnes.

CFB: Artificial Evil (Book 1 of The Techxorcist) is a story of origin and what makes us human. It’s set in post-cataclysmic 2153 where the last remaining population exist within a dome city called City Earth.

To manage resources, the owners of the city—the shadowy benefactors ‘The Family’—have implemented a death lottery to control the population and limited resources. The book is from the point of view of family man Gerry Cardle. He’s the lead algorithm designer for the death lottery, but somehow, inexplicably, his numbers have come up despite him being on the exemption list. A malicious Artificial Intelligence has broken into City Earth’s network and ‘possessed’ Gerry. He has just seven days to live, to find out the truth, and save the city.

He does this with the help of two criminals who live ‘off-the-grid’ within the dark corners of the city. A teenage girl (Petal), and an ageing priest (Gabriel) help Gerry in his search and reveal a much wider, more dangerous plot and reveal a horrifying truth.

Sounds awesome, dear friend – but tell me, I’ve noticed many horror writers (which is a genre I know you love to write) also dab into Sci-Fi, dystopian worlds, I wonder if it’s because genre authors like to write genre in itself or is it because horror and Sci-Fi are linked, somehow?

CFB: Thank you, Anne. I think it depends on the writer. I personally like to blur genre lines because I like the added flavours that horror, and SF bring. Together they work well because of the fear of the unknown. And with regards to dystopian societies, they bring their own horror. So for me, they are easy bed-fellows. I do think, however, that horror although can be considered a genre in of itself, it’s also a flavour that can be given to many of other genres such as SF, Fantasy, Crime etc…

So what would be the inspiration for this new book – I want names, book titles, etc.

CFB: Initially I wrote it as a short story. It was really just an experiment. I dreamt up the dome city and the character of Gerry and wanted to see it where it went. In terms of what was behind the ideas I would say it’s probably the influence of Blade Runner and Neuromancer, as well as playing Shadowrun as a kid amongst myriad other inputs. This is the closest to my ‘truth’ in terms of writing as I can currently get to in terms of outlook, themes and subject matter.

What’s next for the writer and editor? Any cool projects coming out??

CFB: So many things, my head spins just thinking about it. From a writer’s perspective I have a gothic novella coming out later in December by Fox Spirit Books called ‘Heart for the Ravens’, and I’m releasing a horror novella around march time titled ‘of Darkewood & Ivory’. Beyond that I’m also working on the two follow-ups to Artificial Evil (Assembly Code and Alpha Omega) and hope to have those ready for mid 2013.

As an editor, things are super busy. I’ve got an anthology due out in February (Urban Occult), and 6 novellas in my new Pulp Line range of stories. You can find more details on these at
www.anachronpress.com. 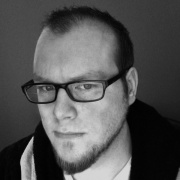 Colin F. Barnes is a writer of dark and daring fiction. He takes his influence from everyday life, and the weird happenings that go on in the shadowy locales of Essex in the UK.

Growing up, Colin was always obsessed with story and often wrote short stories based on various dubious 80s and 90s TV shows. Despite taking a detour in school into the arts and graphic design, he always maintained his love of fiction and general geekery. Now, as a slightly weathered adult, Colin draws on his experiences to blend genres and create edgy, but entertaining stories.

He is currently working on a Cyberpunk/Techno thriller serial ‘The Techxorcist.’ which combines elements of Sci-Fi, Thriller, and Horror.

Like many writers, he has an insatiable appetite for reading, with his favourite authors being: Stephen King, William Gibson, Ray Bradbury, James Herbert, Albert Camus,  H.P Lovecraft, Clark Ashton Smith,  and a vast array of unknown authors who he has had the privilege of beta reading for.

Author of Dark Tendency END_OF_DOCUMENT_TOKEN_TO_BE_REPLACED
This entry was posted on Thursday, November 22nd, 2012 at 8:41 am and tagged with Books, Inspiration, Writing and posted in Good Book, Highly recommended. You can follow any responses to this entry through the RSS 2.0 feed.
« Chatting with… Rosanne Rivers
Mistral »