I rarely get excited about upcoming films now that I’m absolutely positive producers are losing their grasp on what people want to see in movie theatres. Seriously, what is it with all these remakes? No need to fix what ain’t broken, I say. Like that new Jane Eyre: how dare they question William Hurt’s haunted blue eyes and Charlotte Gainsbourg’s fragile performance? That film was perfect, with its beautiful photography and gorgeous settings… I will not comment on Working Title’s take, I refuse to watch it.

Then comes this multi-media artist Miranda July with her second feature, The Future. The premise is cute: a couple fights end of thirties blues by pursuing their dreams before adopting a terminally ill talking cat. Yes, I am aware I wrote ‘talking cat’. Normally, I’m no fan of artsy films and get annoyed quite easily with fartsy details. But this artist, this Miranda girl, she knows what she’s doing. Proof? Let’s go back in time to the year 2005, to when I was finishing my Master’s degree in Screenwriting.

I went to see Me and You and Everybody we Know (2005) with my friend Adam Sydney, who is also a terrific writer. We laughed, teared up a little in this tiny, indie movie theatre on Finchley Road in London. The magic? Everybody stayed seated after the credits.

Next to me sat a twenty-something girl who had just come out of chemo for breast cancer, and she said this was the first movie in a while that she truly enjoyed. The couple in the row behind us admitted this was their first date. Next to Adam, an older couple kept giggling at the blow job jokes in the movie. In the front row, a guy admitted that this was his fourth time seeing the film, and then blushed as he insinuated how photogenic Miranda is as the main character. 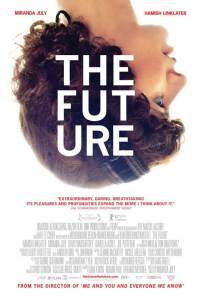 And I remember them, their smiles, their bright faces. Their laughter, too. Never happened before or since—strangers talking in a movie theatre until even the projectionist joins in the conversation. I think Miranda would like to see how her intimate story touched all of us, how deeply it affected us.

I consider Miranda July some kind of a magician: her stories always hold such beautiful universes and dark realities, I just can’t help but be excited to see where she’ll take me next. The Future by Miranda July is coming to theatres July 29th.

Author of Dark Tendency END_OF_DOCUMENT_TOKEN_TO_BE_REPLACED
This entry was posted on Friday, June 10th, 2011 at 8:17 am and tagged with Films and posted in Highly recommended. You can follow any responses to this entry through the RSS 2.0 feed.
« My love of bookstores
I miss Film »